As the clean-up efforts continue along the Gulf Coast and throughout the Northeast, forecasters at the National Hurricane Center (NHC) are keeping busy monitoring new developments in the tropics. Here is the latest on what may threaten the US next as hurricane season kicks into high gear as well as news on what Ida has left behind.

When Will Ida’s Wrath End?

The threat of severe weather at the hands of Ida is officially over. The remnants of Ida finally moved off of the New England coast on early Thursday. However, the damage has been done to a large portion of the Gulf Coast and the Northeast. Because of the significant rainfall associated with this storm, some rivers and streams will continue to rise for the next several days. This will pose more danger as search and rescue missions continue.

Residents of the Gulf Coast have spent the last few days assessing the damage from Category 4 Hurricane Ida. The good news is that the major levees protecting the city of New Orleans held up to the relentless rain. However, some of the levees surrounding the smaller communities outside of the city did fail.

Parts of Plaquemines Parish were flooded after a failed levee sent water rushing into the town of Jean Lafitte. Mayor Tim Kerner said that much of the town was underwater, including a school that was destroyed by the raging floodwaters.

As of Thursday evening, over 800,000 people were still without power, including a great part of New Orleans. People were forced to wait in long lines for groceries and gas as the region sweltered in the high heat and humidity.

Looking at the Rest of the Tropics

Take time to catch your breath now because Hurricane Larry has just emerged in the far eastern Atlantic. The twelfth named storm of the season formed early Wednesday morning 175 miles south of the Cabo Verde Islands. Larry was boasting maximum sustained winds of 80 mph by mid-day Thursday. This speed was up from 70 mph the night before. 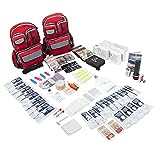 Hurricane Larry is now located approximately 660 miles to the west of the southern section of the Cabo Verde Islands. It is moving to the west at a speed of 17 mph.

The NHC initial forecast had originally predicted that Larry would strengthen into a Category 1 hurricane by Friday afternoon, however, it hit that stage over 24 hours earlier than predicted.

It is still too early to predict if Larry will affect the US. At this time, forecasters believe that the storm will continue to move to the west for the next few days before it begins to veer toward the north. When it makes this turn will affect the storm’s path through the weekend.

There are a number of potential paths for Larry to take in the coming days. Rest assured, the NHC will stay on top of this quickly developing tropical storm.

One thing that forecasters are nearly certain about is that Larry will continue to strengthen over the next few days. Favorable environmental conditions will fuel this growth as the storm spins in the warm waters of the Atlantic.

Most projections show Larry turning into a Category 3 storm with sustained winds of at least 111 mph by this weekend or early into next week. It is also likely that the storm will hit Category 4 strength. This classification of storms features winds between 130 and 156 mph.

For a point of reference, last Sunday’s Hurricane Ida made landfall in Louisiana as a Category 4 storm.

In addition to the action in the Atlantic, the southwestern Caribbean continues to be a hotbed of tropical activity. A large area of low pressure is delivering disorganized showers over the southwestern corner of the Caribbean Sea. This system is moving to the west and northwest as it brings rain to the coast of Central America.

The area may undergo further intensification as it moves into the warm waters of the southwestern Gulf of Mexico over the next few days. This could bring the chance of heavy rainfall to parts of Central America and over the Yucatan Peninsula by the weekend. This part of Mexico has been hit especially hard over the last several weeks by a series of tropical features.

Lastly, there is one additional area of interest spinning a few hundred miles to the southeast of the southern Cabo Verde Islands. This area of showers and thunderstorms continues to show signs that it may begin to further organize as it moves to the west at a speed of 10 to 15 mph. While the environmental conditions in its path may hamper its chances to intensify further, forecasters will be monitoring the progress of this tropical feature in the coming days.

By September 1, there have been 12 named tropical systems for the Atlantic basin. This list includes two major hurricanes. The pace is running well ahead of normal. In an average year, the 12th named system would not develop until early October, putting this year over one month ahead of normal.